Distributors: 4 films just waiting for you!

Benediciton by Terence Davies, The Braves by Anaïs Volpé, Freda by Gessica Généus, and Earwig by Lucile Hadzihalilovic. After travelling to festivals this summer and autumn, these 4 films are still looking for a home in several territories. 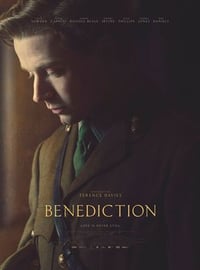 According to Variety, the story inspired by the life of English poet, writer and soldier Siegfried Sassoon has not yet found a home in the United States. Neither around here, where only the British company Vertigo Releasing have come forward. Although Terence Davies is not chasing the box office, we hope to see him live in theatres. The film was screened at the Toronto Film Festival and won the Jury Prize for Best Screenplay in San Sebastian. This week it will premiere at Gent Film Festival, Belgium. We hope that this great festival career will convince distributors to take a look at it.

Discovered at the Directors' Fortnight, The Braves by Anaïs Volpé is one of Moonday's favourites this season! This energetic and moving film stars Deborah Lukumuena (revealed in Divines by Houda Benyamina, and more recently in Robuste by Constance Meyer) and the Swiss actress Souheila Yacoub. Anais Volpé, an actress by training, tells us with great accuracy about the special friendship you create when you work in the same artistic field.

After bright appearances at the Angoulême (France) and Namur (Belgium) festivals, The Braves will be distributed in France by KMBO in spring 2022. We strongly encourage foreign distributors to do the same.

Freda, Gessica Généus first long-feature, has received a standing ovation at Cannes (Un Certain Regard section) and was screened in Angoulême this summer, was released in France this Wednesday by Nour Films. And abroad? Freda received the Discovery and Audience Awards in Namur (Belgium) last week. So hopefully, it will be released in Belgium!

Halfway between a fiction and a documentary format, Freda deals with the very different paths of two Haitian sisters. Haiti and its culture are an integral part of the cast and show the director's commitment to her country.

Synopsis: Somewhere in Europe in the 1930s. Albert Schelling, a solitary and taciturn man, is employed by a twelve-year-old girl whose ice teeth must be changed daily. In the large flat they live in, the days pass in perfect harmony with Albert's daily chores and the child's games. This harmony is shattered when Albert is ordered to take the girl by train to Paris. For the first time, Albert has to resign himself to taking the child out of the flat where she has been living in seclusion. The closer the trip gets, the more the past that Albert has repressed comes back to haunt him.

Toronto, London, Sitges... The least we can say is that Earwig has already travelled! The film even won the Special Jury Prize in San Sebastian and is currently being screened in Quebec for the 50th edition of the Festival du Nouveau Cinéma. Hard to believe that this gem by the talented Lucile Hadzihalilovic will go unseen for long!

Want more information about these films? Follow them on Moonday !