The Right Words was a hit! Selected at the Angers, Sundance and Cannes Film Festivals in 2021 in the short film section in competition, this short film has been around for a long time and announces a promising talent: Adrian Moyse Dullin. Focus on this young director. 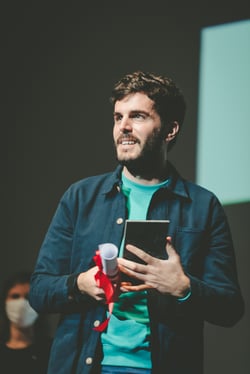 First, could you tell us about your background?

Why did you use a bus as the main setting?

The Right Words was inspired by my bus trips as a teenager, the "odysseys" I made every day between my school and my bus stop. It was like a suspended time between the authority of the school and that of the family unit, a field of possibilities. It is besides at a bus stop that I made my first kiss while getting off the bus!

I was very inspired by this "no man's land" where cruelty, desires and adolescent impulses are expressed. I love the scenic side of the bus, it's like a little rolling theater of love, especially when you consider the moment you get off as a "stage" that the bus is watching.

You mix in the image a point of view of reality with that of social networks, why did you use this method?

The film speaks among other things about the weight of the glance of the others, of the setting in scene of oneself. With social networks, this weight is multiplied. Reality alone" was not enough for me to portray a group of 13-15 year olds.

I wanted to testify to these degrees of digital, virtual realities, while confronting them with the masks of the banter of love. I wanted this crossroads of love to be played out both in reality and on the networks, since everything mixes and these realities merge.

What message did you want to convey through the love relationships of your characters? (Mahdi & Jada and Kenza and Aissatou)

On the question of love that you evoke, this film tells the difficulty of declaring oneself, of revealing oneself, to a girl, to the other, to oneself. The intimate subject of the film is this experience of the truth that one can make in a declaration of love. Mahdi lives an initiatory moment, he comes back on his own prejudices (which are also and especially those of his sister). To be oneself is to renounce representations, to go towards one's truth. This is one of the things the film defends, to get out of gender stereotypes and to be sincere.

Apart from romantic relationships, you also deal with social networks and their impact, what is your message on this subject?

I really wanted to treat a character who had an intrusive use of social networks. Here Kenza, the older sister is a "smartphone obsessive". She is a character who is constantly staging herself, in a compulsive way. Her reality merges with her screen and is diluted to the point of losing her own desire.

It seemed to me that the omnipresence of social networks, smartphones, Snapchat, Insta lives echoed the shame of the gaze of others that Mahdi feels. This omnipotence of the image terrorizes him.

During Mahdi's statement to Jada, what the passengers on the bus see is not what is happening on the sidewalk outside. Everyone believes what they see, but everything is a spectacle, everything is an illusion, nothing is certain. I wanted to play with these degrees of reality, these levels of reading and play with the material of the cinema, with what we see. It is the illusion of the sensitive world and here of the world of social networks.

The choice of the cast is important, how did you choose your main roles?

We did wild casting with Marion Peyret the casting director. For several months. In a very classical way, I was looking for actors who would be able to take on the psychology of the characters I had written. We were looking for mature, sensitive young people. Then we did a rehearsal workshop during which we had to familiarize the young people with their characters. As in the script, we worked with them on the life experiences and history of each of the characters, the relationships they have with each other and to explore situations that are not in the script but that feed the characters. All the work is to make sure that the young people arrive on the set "charged" with the emotions of their character, their psychology, their body.

How did you come up with the title "Haut les cœurs"?

As for the music, I wanted something anachronistic. In my mind, "Haut les cœurs" is an old-fashioned expression, a bit medieval.

I found it interesting to mix the classical and the contemporary, to appropriate an institution of cinema, of the love story: the declaration of love and the games of masks that surround it, but doing it through the spectrum of social networks.

I believe that this expression was a way of stepping back from the subject, a way of saying "the declaration of love is a subject as old as the world" and of placing the film in a history of art.

Since this is your first short film, how did you feel during this festival tour? (Among others Cannes, Angers and Sundance, great festivals! )

A lot of emotions! It's pretty amazing the love affair between this film and the festivals. I hope it will continue! Each selection, each award is a gift, an encouragement for the whole team. It's also exceptional, after two years of Covid, to be able to go back to theaters, to hear the public get moved, it's very touching. The theater is a unique and cathartic space.

Do you have any new projects you are currently working on?

Yes, I am writing another short film as well as a feature film.