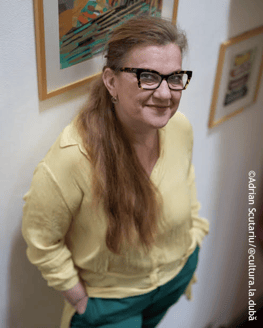 Ada Solomon: This film is a social satire on the criticism and hypocrisy that reigns in our society. And when I say society, I'm not just talking about Romania, where the film is set, it's a satire that depicts the whole world. Moreover, it includes the pandemic and the whole pressure and craziness that is around us today.

You produced all the Radu Jude movies. What do you like about his movies?

A.S. : The things I appreciate the most are the diversity of tools that he is using in terms of expressing his ideas and also his in-depth look in every single subject he is approaching. His perspective is not limited to what he is exploring for the subject but goes like a network in so many directions in terms of philosophy, sociology, politics, and even civic position. And that is what I want to do: a kind of cinema not sticking only to esthetics but also a component meant to raise questions and to put alarm marks on certain issues.

Generally speaking, the films you produce have long and beautiful careers in films festivals, how do you choose the film you produce?

A.S.: I always take care of the storyteller instead of the story. It means that I always want to know why and how the story will be told. And then, if the story still needs to be reshaped and so, it comes at the second place because if the motivation is there and the arguments are steady and the speech around the necessity and the strength of the subject are there, then it will be ok.

In the film, we follow Emi, a school teacher, who finds her career and reputation under threat after a personal sex tape is leaked on the Internet. Her body and sexuality become an issue on which everyone has a comment or a judgment to make. But, she didn’t record this sex tape alone... Do you think we could have made the same film with the husband as the main character?

A.S.: That’s definitely one of the issues. If a male teacher is confronted with a situation like this, having the courage to show it publicly, he will not be expelled but more likely promoted. Not only in front of the professors but, even more important, in front of the children. He will have an aura, like a “hero” or at least an authority figure. While a female teacher in such a situation is labeled “slut” by the folk... Talking here about the majority of course!

The question remains in my mind as well, regardless of the hypocrisy of the parents and so, is she going to have the authority in front of the children and especially in front of the boys? Because of the common perspective, the way our society is still educated and look into this... There is still a long way to get to an understanding of the other, respect intimacy, choices, and private life.

In 2018, you received the Central European Initiative Award at Trieste Film Festival. Here is what they said about you: “Ada Solomon in ten years has established herself among the most important producers of Romania today (...) A woman who has become a fundamental reference for New Romanian Cinema and international co-productions.” As a woman who succeeded in the cinema industry, do you feel like an exception?

Also, there is a big bunch of amazing women producers, with strong voices. In my country (Romania), for instance, I would say that there are much more women active producers than males. At least amongst the people that are only producers because there are quite a bunch of important male producers but most of them are also producing their films as directors. So they are starting in production by producing their own films. And throughout Europe also, I’ve worked with an endless number of female partners and I admire and respect them and feel very confident that there is a feminine voice in independent film production.

You are Executive President of the European Women’s Audiovisual (Ewa) Network. How long have you been involved in this association?

A.S. : We are approaching 3 years now. And it’s an amazing encounter and networking place. Of course, when you look at it in the first place you might say it’s more for the emerging voices to get the support for the more established ones, to learn from them, and to find out how to breakthrough. But for me, it’s a place where I got a lot of energy from my fellows and the younger voices. It’s been an amazing and very pleasant roller-coaster, especially during the pandemic. It helped me a lot to make Bad Luck Banging or Loony Porn production possible in these very complicated conditions because we had, especially during the lockdown, this hangout with members of the association where we were exchanging ideas, solutions, and question marks in a quite intimate set up.

The other organization where I have this kind of talk and brainstorming, not only about the production but about all the steps of a film life, is ACE producers. This also was very helpful.

What motivated you to invest so much in this project?

A.S. : It’s an organization planned on the success. It’s putting in light successes of women as an engine, and it provides content without victimizing or seeing women in the weaker position. It talks about the positive side of womanhood in a positive approach that inspires the other to get rid of their own vulnerability.

Have you seen any improvements in gender equality issues in recent years?

A.S. : I think so. I think we are more visible and present. In the last 10-15 years, more and more women graduated in film studies and started to make their films. The number of active females, not only in directing or writing but also in the other important part of a film structure, is growing. And their speeches are more and more visible too. Even in film literature, more and more are published and become best-selling products. So it is flourishing but it also thanks to the generations and the people that are coming up now, much more confident in their voices.

Several European countries have introduced quotas for the allocation of public funds to directors. What do you think of this measure to combat gender inequality?

A.S. : Any extreme is dangerous. If we are going too far in putting things into squares, we risk losing the original aim. Personally, I’m not a fan of quotas at all. I don't think that we should limit creativity and collaboration. A filmmaker is a filmmaker: work can not be judged by gender. As Radu’s film for instance. It speaks out loudly about the condition of the woman, but it is made by a man. This film would have not passed the quota. It's another issue: how do we establish the quota? What’s the most important? The director, the lead character, the set designer, the editor? Everybody has a voice and a presence in the structure of a film. I think that any kind of really squared vision is making more bad than good. We are talking about art, about cultural products, not about machines.

So no, I’m not a fan of quotas. This is much more important to make sure that the committees that are selecting projects, from the early stage in the public funding up to the festivals programmers should be a kind of parity. And from that moment we don’t need any more quotas into the structure of the film, because the reception will be there in an equilibrium. And from there it will be easier to break through, to be visible, and to be understood.

I never had this problem in my country. But as a producer, I don’t want to have an advantage at the start. I’m even a little bit offended. Why do I need quotas? If I am a beneficiary of quotas, it is stating that I’m weaker. I don't feel myself weaker. And I don’t want my colleagues to be taught, to have this kind of influence that “they need a bit of help because they are weaker”. I don’t think we are weaker.