CEE Animation Experience proposes a series of masterclasses and amongst others, a lecture given by Robert Lence. The former Co-Head of Story in Pixar delivers some of his secrets!

Robert Lence has worked at Walt Disney, Pixar, and Dreamworks. His film work includes such all-time hits as Beauty and the Beast, The Lion King, Toy Story, A Bug’s Life, and Shrek. Robert served as Co-Head of Story on Pixar’s 1995 Toy Story, the first ever computer-animated feature film. The lecture had been organized in collaboration with Anomalia, the Story&Lab incubator where Robert Lence works as an instructor, helping directors and art teams to bring their concepts to project launch.

How to develop strong characters? In Hollywood, nobody knows anything. We all begin with white paper. Here are some tips.

Pitch the logline of your story to your friends and people you trust. Don’t proceed until you see your friends' eyes lighted up. For a Bug’s life, we see that little flames by pitching the idea of a seven samouraïs with bugs film. That's why I will take that film as a study case for the lecture. 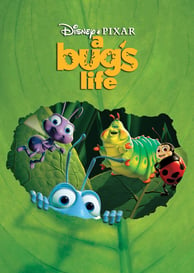 2. Do with the limitations of your time.

We didn't choose to do toys (Toy Story, 1995) and bugs as our two first films by accident. They both deal with hard and shiny plastic exoskeletons. There were the early days of CGI so we were limited by technology. If you look at humans in Toy Story 1 people are joking saying that they look just as plastic as the toys. The translucency of the skin or Skully’s fur blowing in the wind (Monsters, Inc., 2001) came later. Hard to imagine now, but we have to test the technology, find the limitations and wisely construct our story around it. Do you just have a muppet and a smartphone? Just do that, use your limitations and boundaries as your best friends.

Very early in the process, we translate the script into storyboarding. In some ways, the technology has not changed since 1923 and Disney's golden age: we always pin small drawings into a board and work on that base, because a film is first and foremost a visual media. Even Hitchcock worked with storyboarding: first the script and the visuals, after the dialogue. Words are the least important thing in a movie.

4. Write about what you know… Or do some research

Toy Story for instance. Everybody has a memory, a connexion with a toy. It’s a part of us. Maybe we know less about bugs. So you have to do research. It’s all about going to the library and doing your homework. Study them, learn how they work, try to enter in their head. The importance of research can be stressed enough, it’s like the tip of an iceberg, you create all the materials beneath the surface that the audience will never see, but they should feel it. So we immersed ourselves in the world of bugs: read books, watch films, interview some specialists...

Stanley Kubrick, for instance, was an obsessive meticulous researcher. For his finally unrealized film about Napoleon, he asked his team to go to Waterloo to get some dirt so he could match the color to the dirt in his film. That is taking research to infinity and beyond!

5. Design appealing characters
We had to transform creepy fucking bugs into appealing characters to connect the audience. We tried different things to cast the best designs and have diversity: mixing sizes, colors and shapes variations are important. That’s why we choose different kinds of insects to make the circus troupe.

6. Trust the process
Write and rewrite, board and reboard. Do it again, don’t go nuts. Go back to work, rethink, hold on. Even in Pixar, we struggle with the story. We imagine a scene thousand times to make it right.
You have to tell a long life story through a few strong moments. So you have to constantly think: “couldn’t we say the same thing more economically?” Sometimes it takes a while because it's a hard moment to decide to cut a scene we like. For instance, we had that 5 minutes scene in A Bug's Life we finally condensed in one sentence: “you’re fired”. Straight to the point.

7. Don’t isolate, collaborate
Writing a script is never smooth, it’s always a messy interactive and collaborative process. During meetings, everybody is brainstorming, pitching stories, giving ideas… A film is not made by just one person writing away in a room. With this last piece of advice, Anomalia can help. They created this special place for artists and writers to come together and create. There is something special about getting away to brainstorm and to write. Disney and Pixar would do it with the same philosophy. They would go away on “story retreat” with the whole story department somewhere in the woods or by the ocean.

That’s what Anomalia feels like to me: we are a special creative place where we're gonna brainstorm, write and create for a couple of weeks. It’s all gonna be about the story. We try to recreate those big Disney and Pixar story meetings that I was involved in. We have all the research references laying on the table, we watch films, pitch ideas, pin them on the board, see what is working or not… We work all together in a comprehensive and immersive experience.

Interested in joining the incubator? You can register here.

Central and Eastern European (CEE) Animation brings together regional activities for the promotion and development of animation and its talents in more than 20 countries of Central and Eastern Europe (CEE). It seeks to increase professional experience, to present the abilities of filmmakers and producers, and improve the quality of content and the visual side of projects.

Don’t forget, CEE Animation Forum is coming soon ! The pitching, financing, and co-production event aims to boost the projects' international potential, visibility, and access to a wider European market. Pitching and B2B days will take place from 26 to 29 April, and industry days from 4 to 6 May.